The 31st of May is World No Tobacco Day, an annual event centred around spreading awareness of the many risks and dangers associated with smoking tobacco products. This year the World Health Organisation is focusing on Tobacco & Lung Health. 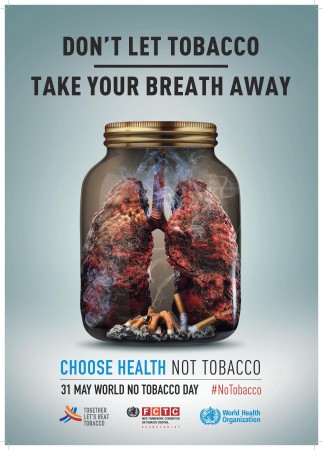 It seems obvious that tobacco use would affect your lungs but contrary to this, many smokers, particularly in developing countries, remain uninformed about the real risks they face. When we look at South Africa, it is a pleasing trend that the percentage of South Africans who smoke has decreased over the past two decades. This is largely due to taxation (more than 52% of the cost of a cigarette to consumers is made up by tax) and legislation around marketing and packaging with warning labels featuring prominently on the front and back of cigarette boxes. However, in spite of these measures about 7 million South Africans still use tobacco products resulting in an estimated 42 100 deaths per year. 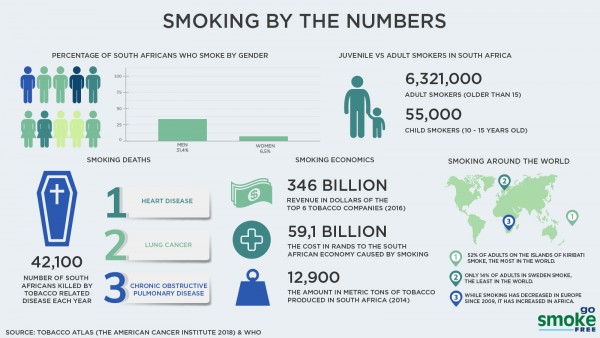 HOW SMOKING EFFECTS YOUR LUNGS

You may think of your lungs as organs for drawing oxygen into your blood, and while this is true, they do so much more than that. They also act as filters that remove pollutants from the air. These pollutants are trapped in a thin layer of mucous coating in the lungs, while specialised hair-like brushes known as cilia sweep out the harmful particles and they are expelled as mucus. Smoking destroys these cilia greatly affecting your lungs’ ability to clean the air and get particles out.

The damage to cilia caused by smoking has a knock on effect. Your lungs consist of an intricate tree of tiny air sacs called alveoli. When the cilia stop functioning well the harmful chemicals from tobacco smoke start building up in the alveoli walls and starts breaking them down. This causes them to be less efficient and eventually can cause them to rupture, leading to a host of breathing problems.

Each cigarette can contain a staggering 7000 chemicals and as many as 250 of these are known to be poisonous with over 70 believed to be carcinogenic. It is these chemicals that increase your risk of lung cancer one of the major respiratory diseases associated with smoking.

Finally, even if your alveoli aren’t damaged yet, the inflammation caused by smoking can lead to chronic bronchitis and damage the breathing tubes and bronchi.

While heart disease remains the biggest cause of tobacco related death worldwide, the second and third spot are taken by lung diseases. Over two thirds of lung cancer deaths are related to tobacco smoking, in fact the Centre for Disease Control in the US claims that 80 – 90% of US lung cancer is caused by smoking. This is further compounded by the fact that lung cancer has an extremely high mortality rate with less than 1 in 5 diagnoses resulting in successful treatment and remission.

The third biggest smoking related killer is called Chronic Obstructive Pulmonary Disease (COPD). This is an umbrella term referring to a host of conditions and diseases that cause a mucus build up in the lungs and difficulty breathing. The diseases covered by this umbrella term include (but are not limited to) emphysema, chronic bronchitis and severe cases of asthma.

While the link between Tuberculosis and smoking has long been suspected, it is only in recent studies that a definitive connection has been proven. Not only does smoking greatly impair the treatment of TB it can now also be directly linked to increased chances of contracting the disease, developing the active form and eventually dying.

And it’s not just smokers themselves who are at risk, the World Health Organisation estimates that 165 000 children under the age of 5 die every year due to lower respiratory infections caused by second hand smoke.

BUT LET’S TAKE A DEEP BREATH –  ALL IS NOT LOST

If this all sounds very scary, that’s because it is. Damage to the alveoli in the lungs is irreversible and directly dependent on how much a person smokes per day and the time period they have smoked for. However, the best time to quit is right now, and the sooner you quit the better it will be for your lungs.

After quitting the cilia in your lungs will start functioning again (this is why people often cough immediately after stopping as these amazing little organs start cleaning the air again). The decrease in inflammation will make breathing easier even a few days after stopping. However, the biggest reason for stopping is the reduction in the risks associated with TB and lung cancer. If you stop smoking today, after 10 years your risk of contracting lung cancer can return to that of a non-smoker.

Of course if it were easy to quit, we wouldn’t need initiatives like World No Tobacco Day. The myriad health risks and mountains of scientific evidence would be enough to put smokers off cigarettes for good, but it isn’t that simple. Not only is nicotine highly addictive but the habit of smoking is deeply rooted in people’s lives and routines and it is this psychological dependence that makes people not want to stop even if they know the risks they face.

That’s why our program, GoSmokeFree, places ongoing support at its heart with an evidence based program designed around motivational interviewing, behaviour change and medication to give you the tools you need to kick the habit, and make sure it stays kicked.

Read more on GoSmokeFree and quit this World No Tobacco Day! 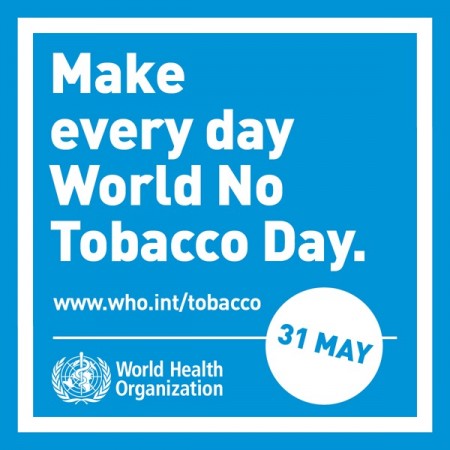